If you are a head coach, what do you look for in an assistant coach?

If this were a joke, the answer would be someone who has a talented son.

OK, all joking aside, if you are a head coach, seriously...what do you look for in an assistant coach?

Let me put it this way. Pretend I'm interviewing you for a podcast episode and this is one of those lightning-style "about me" questions: "A head coach's assistant coaches: should they be like-minded or different-minded?"

(And to clarify, "like-minded/different-minded" refers to coaching philosophy.)

(And to clarify, "major issues" refers to anything a head coach does, from how practices are organized to setting the batting order to planning the defense to pitching rotation order to whether tee or live pitching is best for training to hit, etc.)

No joke: most head coaches choose their assistant coaches simply because of the assistant coaches' sons ability, whether it's for political purposes on a travel team or so the head coach can secure those kids for the draft in rec leagues.

This is simply a bizarre twist on the cliche of keeping up with the Joneses'. In many rec leagues and even some travel team leagues, several coaches with talented kids team up, and if you are a head coach on the outside-in regarding team-ups, you better find an unattached talented kid yourself and try to persuade that kid's dad to partner with you or else your team will be behind the eight ball before the season even starts. As John T. Reed put it in Session #8 of the Youth Baseball Edge podcast, "championships are won on draft day."

In other words, there is usually zero thought into what a head coach wants from his assistant coaches. If you're just trying to keep up with the Joneses, it's understandable. But if you are one of the Joneses, then it's time to ponder this question a little more deeply than you may have done in the past.

Head coaches: exactly what are your expectations of your assistant coaches? Do you have any?

Assistant coaches: exactly what are your expectations of your head coach? Do you have any?

For the head coach, the assistant coach should actually be a blend of both like-minded and different-minded.

The different-minded part helps show you things you may not have noticed. On the other hand, if all your assistant coaches are "yes men", then you'll never get a different perspective.

Let's face it: no one knows everything there is to know about coaching. And to deprive yourself of thinking outside your own box is to stay stagnant as a coach. Even if you experiment with something and fail, at least you learned something. The irony is we probably preach to our kids how we can learn lessons from failure and yet we as coaches are highly resistant to expose ourselves to failure.

Here's an example: let's say you as the head coach subscribe to the pro model of the batting order (i.e., fast guy at leadoff, best hitter bats third, power hitter bats cleanup, everyone else afterward in descending order of hitting ability). However, your assistant listens to Kyle Nelson's Cornerstone Coaching Academy podcast where he hears that your highest on-base guy is leadoff, best hitter bats second and everyone else afterward is in descending order of hitting ability, so he suggests that to you. You don't necessarily have to step outside your comfort zone and agree to this new batting order philosophy. But you were at least exposed to something outside your comfort zone, and you considered it. That gives you options and a chance to improve yourself as a coach. If, however, you have silent assistant coaches who only do as they are told and don't offer you any new ideas, then you won't learn much.

Of course, by "different-minded", I do NOT mean assistant coaches who actually do different things than what you wanted. For example, I once had an assistant whom I would explain how to run certain drills with a small group of players—only to return and find that assistant doing a drill that was drastically different from what I had explained to him. When I asked him why the drill was different, he answered that the kids looked like they knew what they were doing so he decided to do something else. That's not what I mean by "different-minded". You don't want someone who thinks he's the head coach. Which leads me to...

Why like-minded is important

You also want assistant coaches who are like-minded. That means two things:

Let's say you're a travel coach. You may, for example, believe as Ray Owens does in Session #15 of the YBE podcast that practice is more important than games, tournaments and showcases. You'll want assistant coaches who have your back on that philosophy; otherwise, backstabbing and slanderous rumors could occur.

Or let's say you're a rec league coach. You may, for example, believe that kids should rotate through the various defensive positions; you'll likewise want assistant coaches who agree with your philosophy and defend you against any parents who are upset that their star player isn't always playing shortstop. 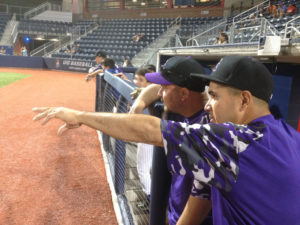 For head coaches, it's important to have assistant coaches who are both different-minded and like-minded. You want someone who will, for example, respectfully ask you why you're playing fast Henry at third base instead of center field in the sixth inning with the opponent's big hitters due up, but who will respect your decision if you've heard his case and still think the best course of action is to play Henry at third base in the sixth. That is, you'll want assistants who might point out something you hadn't considered before but who will fiercely and loyally defend you in the end if you give them a fair hearing. You don't want someone who's a 100% Yes Man. You also don't want someone who undermines you behind your back.

Sometimes you don't have a choice. Sometimes few want to be an assistant and as long as the person is breathing, you'll take him as an assistant just because you're desperate for any kind of help. That happens and you do the best you can with the hand you are dealt.

But if you do get a choice, work with people who are both like-minded and different-minded. It's the best growth you will have as a coach.