"Get your back elbow up!" 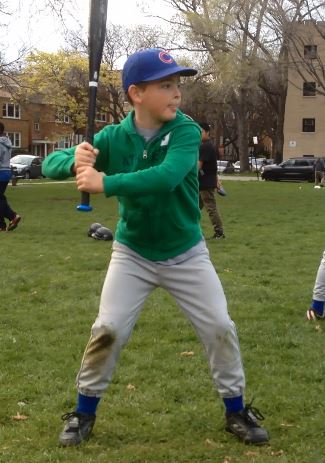 Why back elbows up during the stance is useless 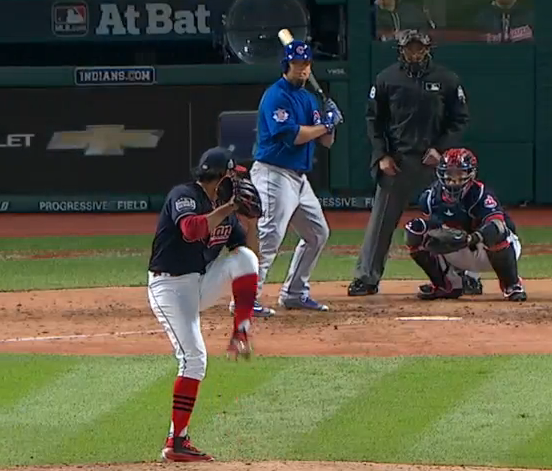 The batting stance phase of the swing is entirely individualistic. Look at the Cubs' Kyle Schwarber. This was taken from Game 2 of the 2016 World Series. Schwarber is, of course, an elite power hitter. Notice (gasp!) his back elbow is not up during the stance. 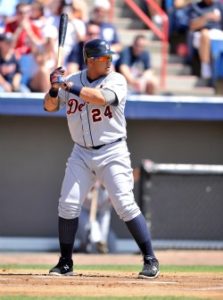 Here is Detroit's Miguel Cabrera (pictured, left) in his batting stance from 2012, the year he won MLB's Triple Crown (batting average leader, home run champ and RBI leader)—a feat not accomplished since 1967. Notice that (gasp!) his back elbow is not up in the stance. Now let's look at the Cubs' Kris Bryant. (The second photo is a clearer view.) 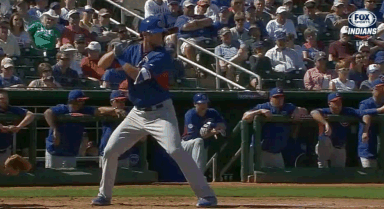 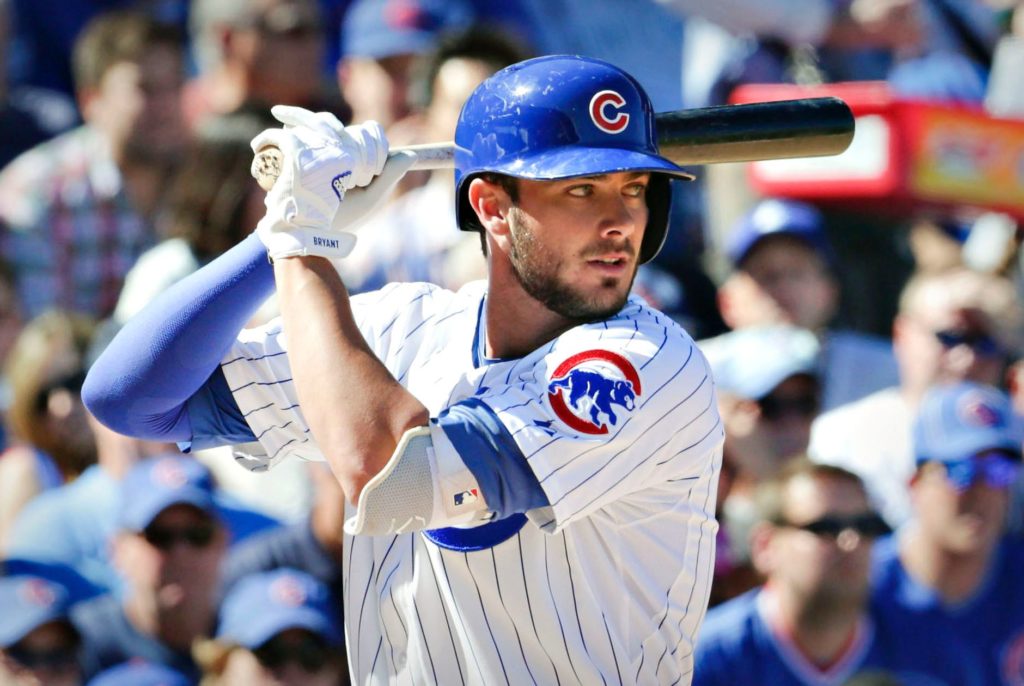 Bryant's stance is more crouched than Schwarber or Cabrera but he too (gasp!) does not have his back elbow up in the stance. Here's Edward Encarnacion of the Blue Jays. 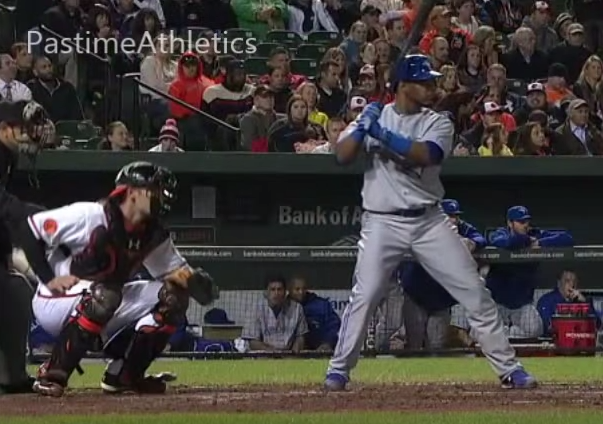 Encarnacion may not be a household name but he hit 42 home runs in 2016, good for a tie for 4th in all of MLB in home runs. Hm. Doesn't look like his back elbow is up in his stance either. Now let's look at two of the top Nationals hitters, Daniel Murphy and Bryce Harper (pictured below, in order): 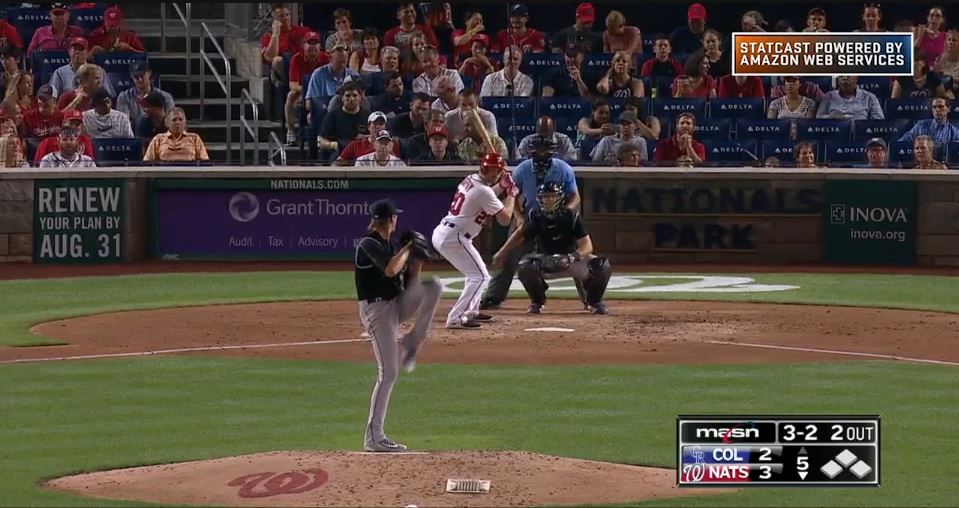 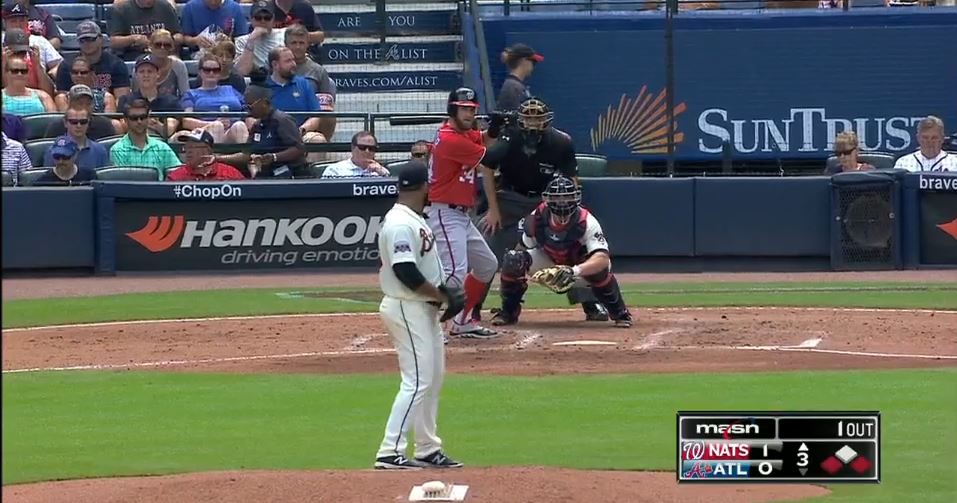 For Harper, his stance has changed over the years, but this screenshot is from his stance in September 2016. So unlike other pictures you may see of Harper's stance all over the internet, this shot is very recent (as of this writing). And both Murphy and Harper's back elbows are down, not up, in their batting stance. Speaking of teammates, let's look at Kris Bryant's teammate, Anthony Rizzo. And we could look at several other elite hitters, but let's make Rizzo our last example here. 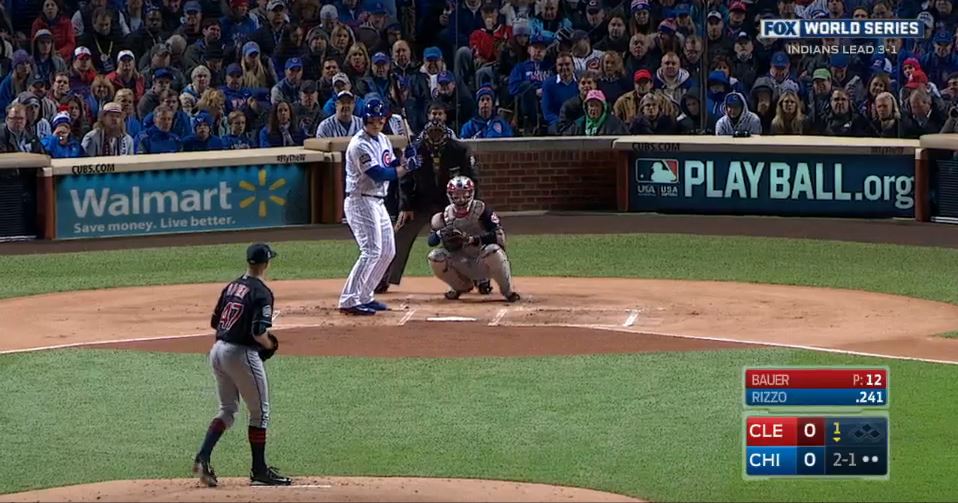 Rizzo's elbow, like all the previously mentioned power hitters, is down, not up, in their batting stance.

Elbow up in the stance

To be sure, there are plenty of elite hitters who do have their back elbow up during their batting stance. Here are just three such hitters (Mark Trumbo, Nolan Arenado and Mike Trout): 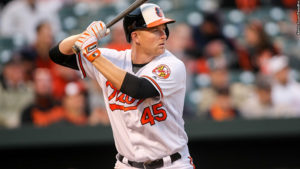 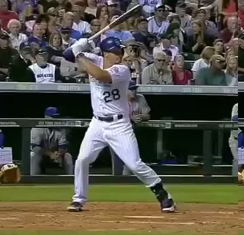 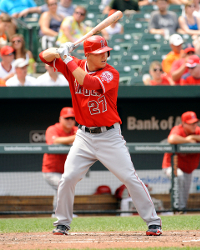 But as you can see from all the different batters, having the back elbow up in your batting stance is not an absolute. 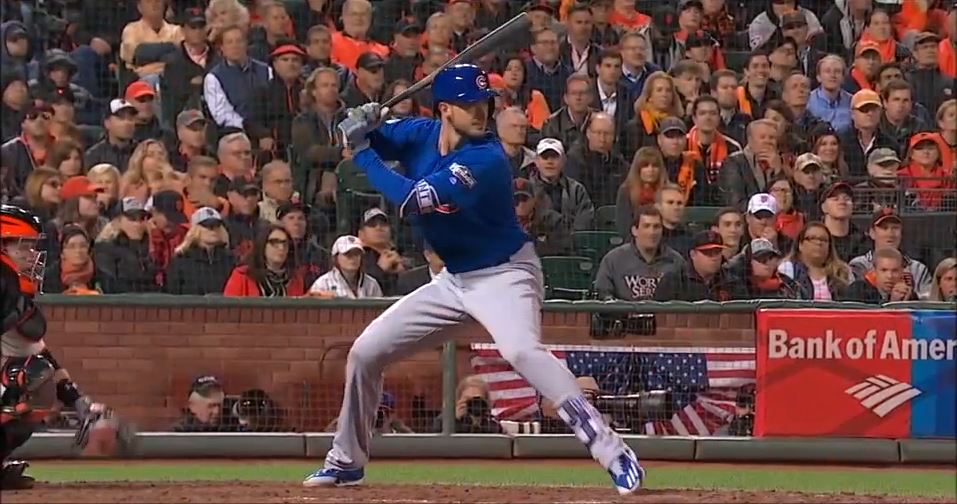 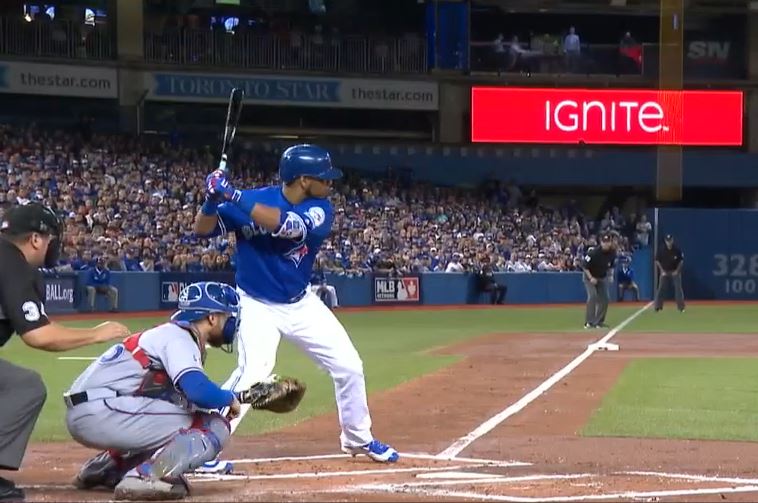 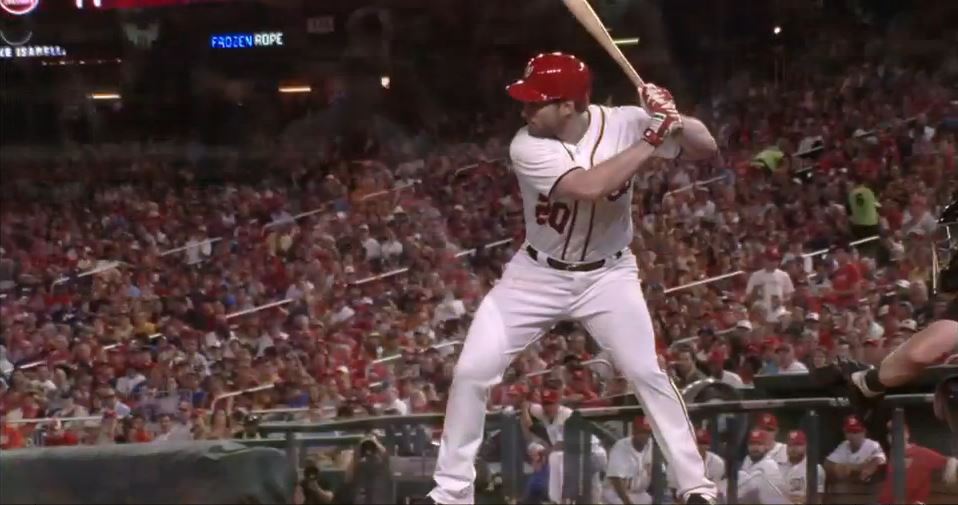 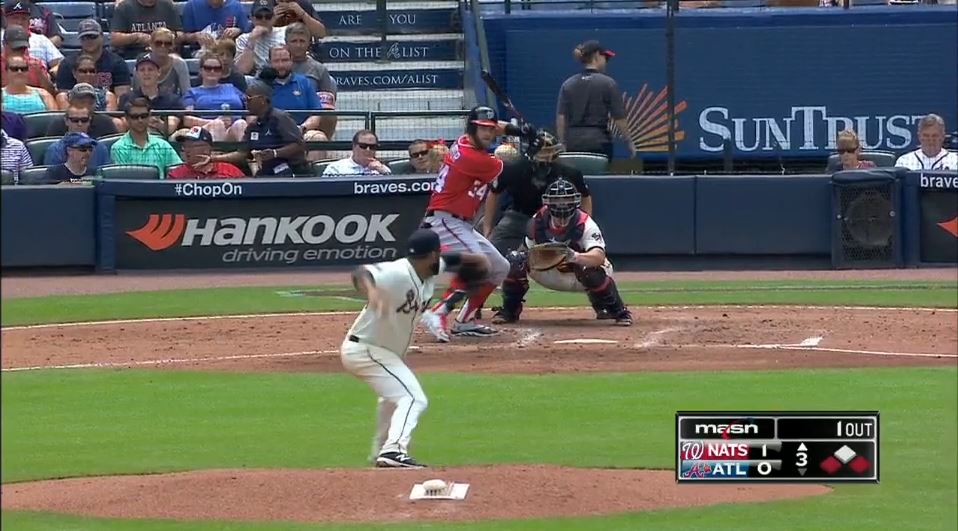 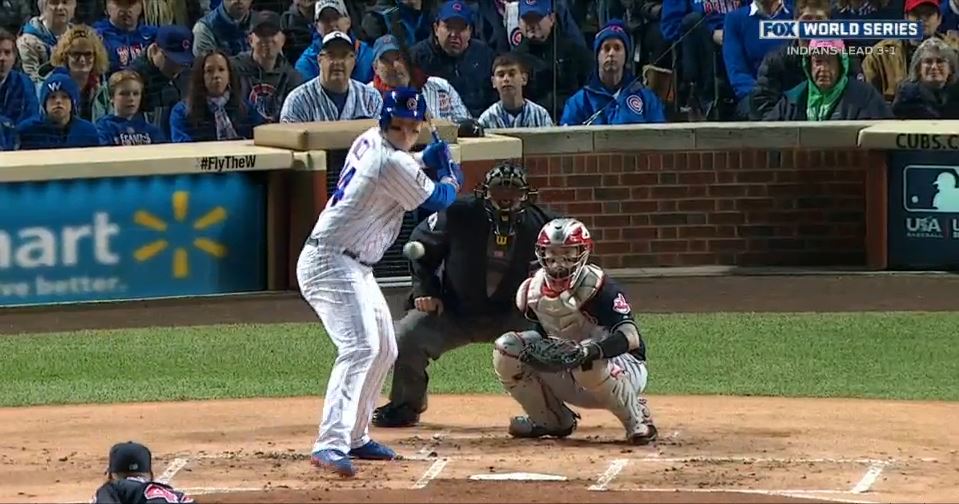 Rizzo's back elbow is hard to see from that angle, so here's a different angle from a different game: 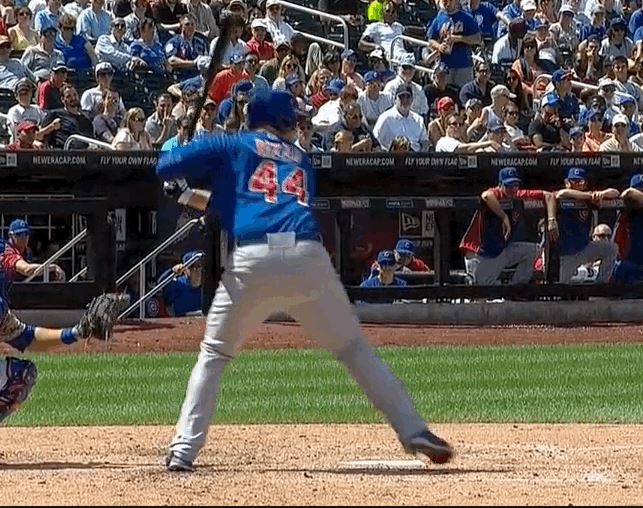 So whether the hitter starts with their elbow up or down in their stance, they all get their back elbow up during their load/stride.

Hopefully, you've seen proof among several of pro baseball's elite power hitters that the back elbow does not have to be up while in the batting stance. And hopefully, you're asking at this point "Why does the back elbow have to be up in the load sequence?" Unfortunately, that is beyond the scope of this already-long post. I'll address the "why" in a future post. Just know for now that it's absolutely optional in the batting stance.

So turns out many parents and coaches have been giving some misinformation about the back elbow (well-meaning, but misinformed nonetheless). Whether the back elbow is up during the stance is purely personal and is—by itself—not required to have a fundamentally sound, high-level batting swing. Let's remove "Get the back elbow up!" out of our lexicon. It's a poor hitting cue when referring to the stance and not easy to discern during the swing.