Most youth baseball coaches don't think twice about optimizing their batting order—until something like the following happens.

It's the bottom of the seventh and final inning for your youth baseball team, which is trailing by one run. The last four hitters on your team are due up to hit. The leadoff hitter pops up; one out. The next hitter reaches on a walk. The next hitter strikes out swinging; two away. A wild pitch sends the runner to second base. A glimmer of hope. All this hitter needs to do is get on base and the top of the order will be up. Alas, the final batter takes a called third strike to seal your team's loss.

This type of scenario really happened—and it happens more than you'd think. And even when this situation occurs, most youth baseball coaches simply resign themselves to this fate rather than question whether there is any way to avoid this. 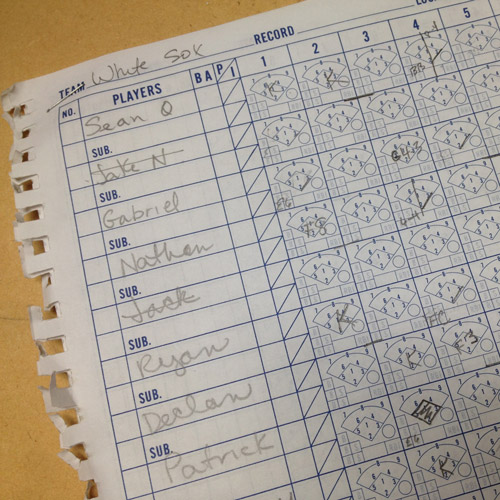 What youth baseball coaches usually do

In almost every lineup, the speedy contact hitter is made the leadoff hitter. A fairly speedy hitter with decent bat control is deemed the No. 2 hitter. The best overall hitter is slotted No. 3. The slugger becomes the cleanup hitter. The remaining hitters are generally placed in the batting order in descending order of hitting ability.

But is this kind of batting order optimal for youth baseball?

Based on the scenario I described at the top of this post, I would propose that it is not.

Bonus: Download an exclusive tool that you can use to optimize your own team's youth baseball lineup. This Excel spreadsheet will automatically suggest two different optimized lineups based on the players on YOUR team. Get it now FREE!

Why the pro-style batting order doesn't work in youth baseball

The pros can get away with this kind of batting order because even the worst hitters (batting 6th, 7th and 8th) are capable of getting hits, even if they are not as good as the best hitters (batting No. 1, 2 and 3). Remember, the difference between a .300 hitter and a .250 hitter is only five additional hits in 100 at-bats.

Stacking your lineup with a string of bad hitters at the bottom of the order dooms your offense when they come up to hit. Even if one bad hitter got lucky and drew a walk, it wouldn't matter with the other bad hitters around him. You would need to pray hard that they won't be due up when the game is on the line.

Furthermore, if your top of the order is having an off day, now your entire offense is now doomed.

How to write a better lineup for youth baseball

The general idea is that you are attacking your opponent in waves.

Need help figuring this all out?

To help give you more of an EDGE, I've got an exclusive resource for you. I've created a spreadsheet that will suggest two optimized lineups for you. All you have to do is capture one piece of data for your team, enter that data in the spreadsheet and the spreadsheet will do all the work of figuring out the optimal batting order for you. It's super easy to use and you can test it against your usual lineup to see if it helps or not. And did I mention it's free?

Note: downloading the Optimizer will also sign you up for my newsletter (unless you are already subscribed). My email newsletter contains exclusive content not found anywhere else on this blog or on the podcasts as well as blog updates. You can unsubscribe later at any time but I think you'll find the newsletter to be quite valuable in giving you the EDGE in your coaching journey.