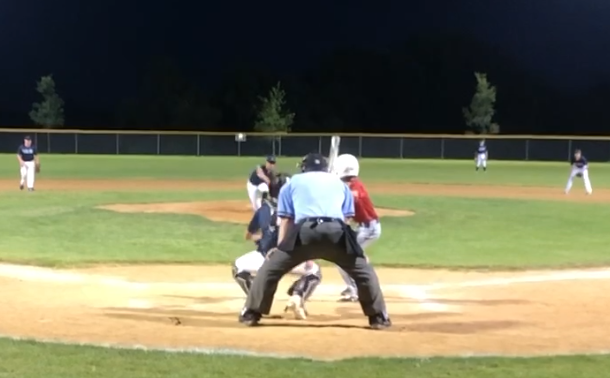 Improving a player's pitch recognition will help them decipher more quickly what type of pitch is coming, whether the pitch is a ball or strike and whether it is a pitch that is likely to hit them. This helps batters swing at more strikes and less balls. And it helps batters who are afraid of being hit by a pitch to recognize sooner whether a pitch will hit them so they have more time to react and get out of the way.

In order to help with their pitch recognition, I’d start by pitching to them from the same regulation distance, using tee balls. The reason for regulation distance (rather than a closer distance) is because the further the distance, the more game-like and the more time the batter will have to attempt to recognize the pitches. The reason for tee balls is that these balls are softer so they won’t hurt as much in case you accidentally hit them during this drill.

The overall objective is to help batters recognize pitches within the first 10-ish feet of ball flight. Most kids don't recognize pitches until halfway to the plate, so recognizing pitches earlier gives them an advantage, regardless of age or skill level.

How do I execute this?

The goal is for each player to graduate from Level 5.

Level 1: the batter watches the ball all the way to the catcher...I mean, he literally turns his head to follow the ball as it crosses home plate and is caught by the catcher… and he calls it "swing" or "no-swing", meaning strike or ball. You tell him whether he’s correct or not. (I used to have kids call out "strike" or "ball" but I feel that "swing" or "no-swing" is a better mental mindset to have rather than just "ball" or "strike.' So, if he correctly calls the pitches 8 out of 10 times, he moves up to level 2. If he does not get it right 8 out of 10 times, keep repeating with 10 more pitches until he gets 8 out of 10.

Level 2: the batter has to call out "swing" or "no-swing" by the time the pitch crosses home plate. If he calls it out too late (e.g., he calls it when the catcher catches it), then it counts as being wrong, even if he called it out correctly b/c we’re trying to train pitch recognition sooner than in level 1. So again, if he gets it right 8 out of 10 times, he moves up to level 3. If he doesn’t get it right 8 out of 10 times, he drops back down to level 1.

Level 3: Put the cone about 10 feet in front of home plate. Now the batter has to call out "swing" or "no-swing" by the time the pitch crosses the cone. Again, if he calls it after it crosses the cone, it automatically counts as being wrong. Again, get it right 8 out of 10 times, he moves up to level 4. If he doesn’t get it right 8 out of 10 times, he drops down to level 2.

Level 4: Put the cone about halfway between the pitcher and the batter, meaning half of the regulation distance. And again the batter has to call out "swing" or "no-swing" by the time the pitch crosses the cone. We are trying to move the batter’s ability to recognize ball or strike sooner and sooner BECAUSE the sooner the batter can see that the pitch is not going to hit him, the more confident he will be. Again, get it right 8 out of 10 times to move up to level 5, which is the final level. If he is right less than 8 out of 10 times, he drops back down to level 3.

Level 5: The final level. Put the cone about 10 feet away from the pitcher. So at this point, the batter needs to call out swing or no-swing essentially within 20-25% of leaving the pitcher’s hand. Graduation from the whole pitch recognition contest is again correctly calling it ON TIME 8 out of 10 times. And when he graduates, make a big deal out of it. Maybe buy him a pack of baseball cards or a pound of gummy worms or something.

Should I track each player's progress?

Yes, you should have a chart of which level each player is at. The coach running this drill updates the chart as players pass levels. You don't HAVE to chart each player's progress but it certainly helps you because then you would know exactly where each player is at.

How long will this take?

Depends on your players. But expect at least a minimum of about 3 practices. Most kids will need about double that (so, about 6 practices). This will take time, especially if you are tracking multiple players. So be patient.