My opinion of scrimmages have run the gamut.

My initial view of scrimmages

When I first started coaching, I used the concept of a "quad game", which Justin Stone taught at a coach's clinic. A Quad Game is basically a scrimmage where you divide up your team into four groups (hence the "quad" part of the name). One group bats, the second group plays the infield, the third group plays the outfield, and the fourth group does some tee work off to the side or behind the cage as they wait their turn to play in the game. The game is timed so that each group tries to score as many runs as possible within a set number of minutes. The beauty of playing by time is that you tell the players it's always one out so the defense has opportunities to turn double plays and runners can learn whether to run on a fly ball or not. 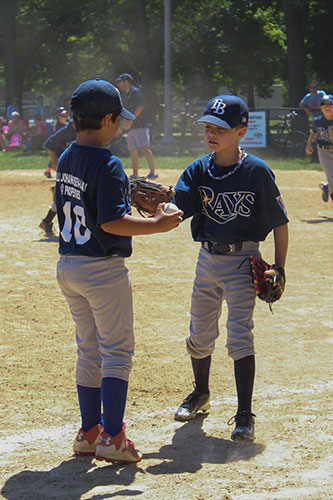 This past offseason, I started to change the way I viewed scrimmages. Many coaches these days mock the "old" way of having scrimmages—pointing out that a coach would pitch to one batter while the other 8-11 kids on the field would be standing around, being bored. And yet as I thought about it, Quad Games were more or less still the same thing—one kid hitting, one kid pitching, and the rest of the kids standing around. Wouldn't it be better to take that weekly half hour devoted to Quad Games and used it to actually practice specific skills?

So this year, I decided to employ Quad Games very sparingly. And I spent that time previously devoted to scrimmages to now work on specific skills. So this year, almost the entire practice time was devoted to skill development. Sounds good, right?

Or does it? Are scrimmages good or bad? Or both? Or neither?

My current view of scrimmages

Now that I've had some time after the season to decompress and evaluate how the season went, I've come to a new conclusion.

Scrimmages are good if you do two things:
1) Make them more challenging, and
2) Have players incorporate something you taught in that day's practice in the scrimmage

I've found this year that I can tweak some aspects of the scrimmage to ratchet up the challenge, which in turn simulates pressure and helps kids learn how to develop more grit.

For example, for pitchers who struggle to keep their composure in games, I would start that pitcher off in scrimmages always with a 2-1 or 2-0 count. If the kid can overcome that kind of disadvantage, s/he starts to develop an attitude of perseverance, which is what we coaches want. On the other hand, if the kid fails and ends up walking batters, you can still give encouragement by letting the player know that you're training him to overcome obstacles and that he'll get better as he practices more often against tough odds.

Another similar tactic I've used is to start the scrimmage with bases loaded or runners on second and third. The pitcher now starts with a normal no-ball, no-strike count but with runners already in scoring position. If a teammate boots a ball, you can use this as a teachable moment to teach the pitcher to be a good teammate instead of going into "meltdown mode". If the hitter hits a bases-clearing double, you can do the situation over again (e.g., put the runners back on base) until the pitcher gets the batter out in order to boost the pitcher's confidence. It is a scrimmage after all, so you as the coach can interrupt and alter the scrimmage however you see fit.

Have players incorporate something from that practice

If you were teaching kids to bunt in that day's practice, or do delayed steals or hit to right field, you can enforce that in the scrimmage so the kids can immediately apply what they learned earlier to game-like situations. For example, if I taught pitchers how to do pickoffs earlier in practice, I would automatically grant the baserunner a free base if the pitcher did not attempt a pickoff within the first three pitches to the batter.

This allows kids to try new concepts in a non-threatening environment (since scrimmages don't count in the standings) and makes them try harder to learn things during practice if they know they'll be asked to try those things later in the scrimmage.

Kids need as many game-like hitting and pitching reps as possible, as well as live baserunning situations to improve their baserunning IQ, and scrimmages provide that. Even tee-ball kids can benefit from a controlled scrimmage. Further, you can tweak scrimmages to challenge your players to overcome obstacles and develop greater grit.

I don't know if my current assessment of scrimmages is the right one. But I think it's the best of both worlds (fun for kids yet they still learn a lot) at this point in time.

Bonus: If you'd like a PDF copy of this post so you can save it or print it, I've created a four-page guide that expounds on this post and gives additional examples of how to amp up your scrimmages.

Note: downloading the Amped Practices Guide will also sign you up for my free email newsletter (unless you are already subscribed). You can unsubscribe later at any time.

Get your free Amped Scrimmages Guide

What do you think? What's your view of scrimmages? Let me know in the comments section below.