Getting started with strength training for youth players? Nick Esposito of espositostrengthclub.com gives some thoughts on functional movement screens, planning workouts and whether certain familiar warmup routines are helpful or hurtful. This is Part 2 of a two-part series. Missed Part 1? Catch it here.

Plus Austin Wasserman of wassermanstrength.com shares the dangers of plank marathons and sit ups in the Wass Strength Tip Of The Week.

In this 38-minute episode, you'll learn:

Links mentioned in this episode:
Here's Austin's thoughts on long-duration planks and situps/crunches:

Why We Don't Perform Long Duration Planks
The study, which appears in the June issue of the Journal of Strength and Conditioning Research, is by Stuart McGill, Ph.D., a professor of spine biomechanics at the University of Waterloo in Ontario.

McGill was among the first to show that the endurance of core muscles is much more important than their strength when it comes to their primary role: to provide stability for the lower back.

But as the researcher who did more than anyone to popularize the plank and other stability exercises, he sees no point in taking any of them to extremes.

“There’s no utility to this kind of activity, other than claiming a record,” he says. “It’s probably detrimental to other aspects of human performance.”

Crunches
In a laboratory setting, McGill and his colleagues have shown that one of the quickest ways to damage these discs is to load the spine while repeatedly bending it back and forth [3].

Which is remarkably similar to what happens during the sit-up.

“The US National Institute of Occupational Safety and Health has set the action limit for low back compression at 3300 N; repetitive loading above this level is linked with higher injury rates in workers,” explains McGill in his book Low Back Disorders.

“Yet this is imposed on the spine with each repetition of the sit-up!”

Repeated spinal flexion also has the potential to cause more damage if it’s done first thing in the morning.

You’re taller when you wake up in the morning than when you go to bed at night. That’s because the discs in your back are hydrophilic. In other words, they suck up water while you sleep.

First thing in the morning, these discs are like a balloon full of water.

If you do a lot of bending (such as sit-ups or touching your toes), there’s a lot of stress on those discs.

In fact, the stresses associated with early morning bending exercises are roughly three times higher than when you perform the same exercise two or three hours later.

“Researchers have documented the increased annulus stresses after a bout of bed rest,” says McGill. 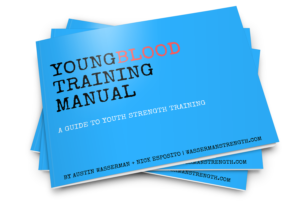 Right-click on this link and 'Save as...' to download this episode.