The Insider Bat is a unique, angled tool with a flat paddle that is designed to develop muscle memory and diagnose problem swings. How do I know this? Because it says so on their web page. 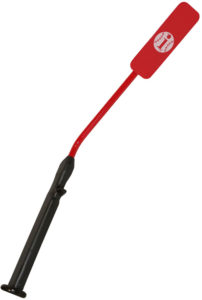 I bought the Insider Bat many years ago because I wanted to be a good coach and give my team the best tools to help them succeed.

What I found was the opposite.

The bat's "sweet spot" was supposed to indicate to the hitter when a flaw in the swing occurs. But when my team of 7 & 8 year olds used the Insider Bat—to my shock—some batters were hitting hard line drives while swinging down. Rather than getting any indication there was a flaw in their swing, the kids thought they were doing great!

Additionally, some other kids were casting when hitting but still hit it solid (pulled, but hit solid nonetheless).

Basically, when it comes to diagnosing problem swings, the Insider Bat doesn't seem to be very good at that.

What's more, I'm skeptical it's any good at being a muscle memory tool either. Maybe it trains muscle memory in the wrong way. Let me explain.

Here's a picture from the Inside Bat web site; I added a green line on top of the picture. Notice the hitter's wrists at the point of contact: 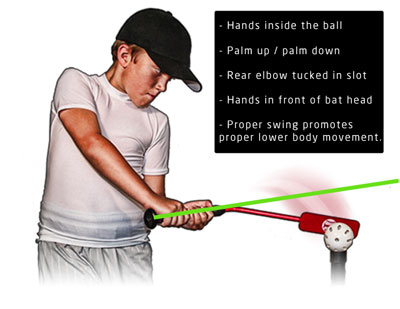 If you ignore the "light saber"-style colors of the Insider Bat and the green line I drew, notice that if the batter used a regular bat with the same wrist angle used for the Insider Bat at the point of contact, the bat would still be behind by the time the pitch is crossing home plate. In other words, the batter's swing would be late.

In each of these swings, we can see how awkward the arms, hands and wrists would have to be positioned in order to hit with the muscle memory training of the Insider Bat.

The fact is that the angled bat face of the Insider Bat—the very thing that the company claims is its best feature—does not resemble anything like the high-level swing you want to teach your kids. Your wrists are in a completely different position and your forearms are in a different position. And it would be impossible to hit pitches out in front of you (as Bryant and Donaldson did in these photos) with an Insider Bat-trained swing.

One more note: the Insider Bat recently picked up the endorsement of the Houston Astros' Carlos Correa, who is pictured on their home page training with it. This is proof that endorsements in and of themselves are not useful product validations. Test things yourself, if possible. Or see if someone you trust has tested them with an objective eye. As Ron Wolforth said, cynicism is not good but skepticism is good.

I can assure you I will never promote any product to you that I felt was not truly useful, no matter how much money is offered to me to promote those products. My job is to serve you.

In this case, no one asked me to promote this product; I bought the product myself. And after my experiences with it, I sold it on eBay and thankfully recouped almost all my money.