To paraphrase a well-known iPhone slogan: "There's a drill for that."

Don't get me wrong. We've come a long way from how youth baseball practices used to be organized: a coach standing at home plate with a bat in his hand and all the players on the field, with one player at a time getting any action and the other 15 kids standing around, bored out of their minds.

Today's drill-based, station-oriented practices are definitely more efficient than past ways of conducting practices—in terms of keeping many players pre-occupied at the same time so fewer kids are just standing around. But today's practices are not more effective. As one legendary coach put it, 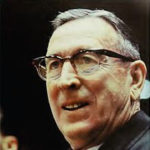 Today's practices have a lot of activity, but for most, there's not a lot of accomplishment.

Bonus: I have a FREE ebook on "The Only Drills You'll Ever Need (Hint: There Are Only 4)" that suggests four drills that strive for accomplishment rather than just activity. Click here to get this popular ebook free.

Why most drills are a waste of time

There are three reasons why all the busy-ness of drills do not accomplish much:

Let's break it down.

Some drills break down individual components of a skill. For example, one common throwing drill has young players hold their throwing arm up vertically with the focus on making the throw with just the wrist snap (see picture, right). The goal is noble: teach kids to throw with a flexible wrist, not a stiff wrist.

The problem is the drill doesn't simulate any skill the players would do in a game. No one throws like that in a game. So kids could practice this drill all day long. Yet when it comes time to make a real throw, the kids still could throw with a stiff wrist since the drill they practiced bears no resemblance to the actual skill they're trying to fix.

Another example is a drill where kids throw while on their knees (or one knee or sitting indian style). The goal is to take the legs out of the throwing equation so kids get the feel for using their hips and shoulders when making a throw. However, I've seen kids complete this drill properly and go right back to their old throwing habits once allowed to make regular throws. Again, the drill they practiced bore no resemblance to the actual skill they were trying to develop (how many times do you throw from your knees or sitting indian style in a game?), so the concept in the drill didn't take hold in the players.

Some drills do simulate a game skill. For example, there are drills aimed at helping establish a stiff front leg when hitting. A stiff front leg is indeed important to help transfer your energy from continuing to move forward. And a drill that simulates a game skill while attempting to correct a mechanical defect is great.

However, drills to correct mechanical defects need to be done with tremendous repetition. In the example of fixing the "leaking" front knee, the player has ingrained that habit from many prior swings. To change that habit means repeating a new procedure often enough to override the brain's memory of the old procedure.

Yet consider how infrequently a drill is done. Say you break up a group of 12 kids into four smaller groups of three players each. Now say you have each small group perform a drill for seven minutes each. Let's further say that the seven minutes does NOT include time spent giving the kids instructions, retrieving balls hit into a net or off a fence, or any other time-wasters. Let's assume you also have an assistant coach with a bucket of balls immediately setting up a new ball on the tee as soon as the player doing the drill hits a ball off the tee. Let's further assume the player performs the drill perfectly so no time is needed to stop and give correction. So the only time spent in those seven minutes is truly devoted entirely to the execution of the drill (an entirely impossible scenario, but for the sake of argument, let's run with that).

If you divide seven minutes by four players, that is 1.75 minutes per player. If it takes six seconds for each swing, that's 17 swings per player during that seven minute drill. And since you only have players do a drill once per practice, that means 17 swings per practice. If you're like most coaches, you like to vary your drills. So you might do that drill only once every two weeks. That's 34 swings per month. I'll be generous here and grant you that you'll repeat this drill every month in your season. In a three-month season, that's just over 100 swings.

A habit, however, often requires thousands of reps to replace an old habit and establish a new habit. Not only is 102 swings clearly not enough, but in real-world application, players won't even get 102 swings due to all the time wasters that I initially excluded. Six swings per practice is more realistic, and you might come back to that drill only one more time all season. So we're talking a more likely scenario of 12 reps all season.

As you can see, for mechanical habits like swing flaws, it is near impossible to fix those flaws the way most coaches currently try to fix them. Instead, we've told our kids what they're doing wrong, now making them aware of the flaw and subtly eroding their confidence.

Some skills do not need a lot of reps to ingrain, such as baserunning or catching a relay throw on the forehand side. For these types of skills, you may only need to do the related drills a couple times a season. But for skills involving repetitive mechanics—like pitching or hitting—you will need to devote a ton of reps in your practices each season if you want to see improvement.

Some drills actually teach incorrect skills. Consider the fence drill, where a young batter stands near a fence and tries to swing without hitting the fence. It is designed to prevent the hitter from extending his arms too early in the swing. And that part is noble. But it also teaches the faulty mechanic of "knob to the ball," where the bat head is facing the catcher and the bat knob is facing the pitcher. Further, the high-level swing requires a circular hand path so the bat does need to swing around as the hips rotate—which means the bat will hit the fence if the high-level swing is executed properly. Yet the fence drill teaches kids who execute the high-level swing that they did something wrong.

Another example is an ingenious drill designed to teach kids to swing down. The drill puts a tall chair in front of a tee so that the batter must swing down in order to avoid hitting the chair in order to hit the ball on the tee. While the drill is incredibly clever, the skill being taught is absolutely wrong—batters should not be taught to swing down.

How to evaluate your current drills for usefulness

It's actually simple. For every drill you want to use, ask yourself:

Drills need to simulate game skills. So if we want a drill that will teach kids how to, say, throw properly, the drill should involve a real throwing motion. Kids will sometimes do a baseball "air skill", like how people do "air guitar." But when was the last time you saw a kid do an "air throw" while sitting indian style? Teach kids the real skill and they will pick it up faster than if you taught the kids some foreign-looking drill.

Drills need to teach the right skill. How do you know if the drills you're teaching are correct skills? It is important that we as coaches—or baseball parents—teach the right concepts; we don't want to be the baseball equivalent of teaching 2+2=5. And the best way to determine validity is to compare the skill in question to a standard. If the skill being taught matches the standard, it is valid; if the skill being taught does not match the standard, it is invalid.

What would be the standard for baseball? I believe that MLB players are the standard since they are the very elite at the game. So if the vast majority of the pros do something, then kids should probably learn that also. However, if there is wide variance among the pros at something, then it's likely that the issue is more stylistic than fundamental.

Some strategy issues, like setting a batting order, cannot be compared to MLB due to the intrinsically different nature of youth baseball. For issues like those, this site—as much as possible—will try to either conduct testing to determine a "best practice" or incorporate deeper thinking based on statistics—much like the sabermetric-community does with MLB issues. As much as possible, the goal I have for Youth Baseball Edge is to be evidence-based.

To help give you even more of the EDGE, I've got a great bonus for you. 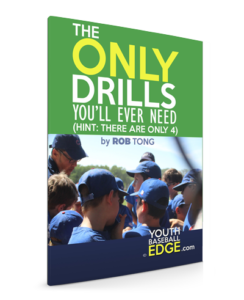 I've written an ebook on "The Only Drills You'll Ever Need (Hint: There Are Only 4)". This ebook covers the four essential drills you should implement in EVERY practice but also lists for you the progression for each drill so you know exactly how to upscale each drill as players advance during the season. Not only that, it also gives EXTRA tips and strategies to help you take these drills to the next level. It's my very best ebook and it's absolutely free. Just click the blue button below to download it.

Note: downloading the ebook will also sign you up for my newsletter (unless you are already subscribed).

Get the ebook now