If you've poked around on the internet for youth baseball coaching tips and drills lately, you've likely seen that almost everyone sings the praises of competitive games during practices. 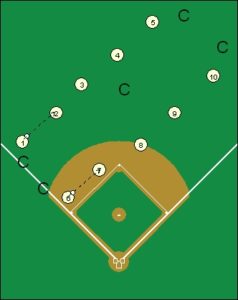 It makes practices more fun, gurus say. It makes practices more engaging, experts say. It simulates game conditions, people say. And to some extent, those are all absolutely true. Problem is, they are not absolutely true all the time. You need to be wise with your use of competitive games or you will negate the benefits from using them. I'll explain some pitfalls with arbitrarily using competitive games and how to best use them.

Let's say I want to teach little Johnny and his friends how to build a treehouse. I give them the materials. I explain what each tool is and how to use each one. I explain the steps in building the treehouse because some parts need to be completed before doing others. And then I have them start working on it, following the instructions I gave them, and supervising their technique to ensure they're doing it right. There's a process and the kids will probably feel energized as the treehouse starts to take shape and they see their progress. Notice something that's intentionally lacking: competitive games. I don't tell the kids, "OK, the team that hammers in the most slats wins! Johnny and Billy are on one team, Sammy and Tommy are on the other team...go!" The reason I, or other woodworking teachers, wouldn't do that is because competitive games would likely make the kids' work more sloppy. If I'm Johnny or Billy, in the back of my mind, I'm thinking, "Who cares that the slats aren't exactly two inches apart and aren't really parallel to each other when I'm trying to beat Sammy and Tommy in the most number of hammered slats?" Attention to detail is much less important in a competitive situation. Yet many youth, travel & high school baseball coaches (perhaps even college coaches) use competitive games when they are metaphorically trying to teach their kids how to build a treehouse. Instead of teaching their kids proper footwork during catch play and supervising their technique to ensure they're doing it right, for example, coaches will announce a competition of which pairs can catch the most balls during catch play without dropping the ball.

When to use competitive games

As I mentioned at the top of the post, there is value in competitive games. So I'm not saying not to use them. The question is not should you use competitive games but when to use them and how. I'm not going to give you a list of "Top 10 ways to use competitive games correctly" or a five-bullet list of whatever. If I did that, you'd likely never remember any of it. So I distilled the essence of competitive game usage down to just one question to ask yourself. You can remember one thing, right? I think the easiest way to know when you as a coach should reach for a competitive game in practices is after you ask yourself: Will this competitive game reinforce or replace skills I'm trying to teach the kids? When I'm teaching kids how to build a treehouse, I might use a competitive game if they've all become good at building treehouses. At that time, we can have competitive games while building future treehouses and I can judge the winner based on both quality and speed. That's because by that time, the kids might need a competitive game to spice up the mundane nature of doing something they already know how to do. But when they're initially learning the various skills involved with building a treehouse, judging quality in some contest is going to be tough b/c they don't have the skills yet to produce quality. And frantically building sloppy stuff in a competitive contest will simply reinforce sloppy building habits. At the learning stage, the wonder of successfully building something for the first time should be captivating enough to render any competitive games unnecessary. Let's switch from my treehouse analogy to a true baseball story. Last fall, while waiting for parents to come after practice and pick up their kids, I taught a small group of three kids how to make a shortstop pivot after fielding a grounder in a double-play or force play situation. These three kids were all skilled players, so they knew the basics of fielding but now I was teaching them something more advanced. First I taught them the proper footwork, then I taught them how to throw the ball to the second baseman covering second base, and then I taught how the second baseman should approach the base and pivot to make the throw to first (some of the material Billy Boyer covered in Podcast Episodes 68 and 69). At the time, one of the three kids was a bit on the immature side and tended to get easily distracted during practice. Surely, he's a good candidate for having some sort of competitive game to "engage him" and "keep his interest", right? Well, I did not have any kind of competitive game. Instead, I nurtured all three of them through the learning curve and they were energized as they were starting to get the hang of these new "superpowers", as I called them. They were all engrossed in these new concepts and hungry to learn them. If you then use competitive games to test their prowess after you think they've grasped the fundamentals, those competitions will reinforce what they've learned because now they are trying to instinctively recall what they've learned under duress—which is what we want. But if you use competitive games before they've mastered the fundamentals, they will likely abandon the skills they have not yet forged as a new habit and instead resort to old, familiar habits in order to win the game/race. That would be counterproductive to what we want to build in them. Did you know competitive games in youth baseball practices can actually be detrimental? Click To Tweet

Generally not a substitute for teaching/coaching

For the most part, competitive games should be used to test, not to teach. Is it possible to use competitive games to teach and not just to test? Yes, but you have to be discerning of how to make that happen. Let's do an example. Say you wanted to teach how to do proper throwing relays. You could employ a competitive game to teach the concepts but the only way to do that is to have parental help. Once you've recruited parents, here's how you could use a competitive game to teach. First, you would break up your team into three or four relay lines (no more than three kids per line). One kid is the outfielder, the middle kid in the line is the relay man, and the third kid is the catcher. Your goals are to teach: Then you'll need a parent for each line. Each parent is the judge for that line, ensuring all three goals are met. The first team to get the ball to the catcher while meeting all three goals is the winner. This requirement to meet all three goals emphasizes attention to detail on relay fundamentals, not just which team relays the ball fastest, and ensures the kids are properly learning while trying to perform at "game speed". So be careful to discern whether the competitive games you use are actually teaching skills or not. Let's go through one more example of a bad competitive drill. You may think having pitchers compete to see who throws the most strikes is a good competitive game. Problem is, your pitchers may not throw their max effort if they are throwing balls b/c they may think if they take some speed off the ball, they'll have better control and throw more strikes to win the competition (i.e., kids start "aiming" the ball once they realize they're not throwing strikes). That reduction in velocity in an attempt to throw more strikes, in turn, is counterproductive because you want your pitchers throwing strikes with top velocity. A better competitive game would be to use a radar gun like the Pocket Radar Ball Coach and see who throws the most strikes over a certain speed (e.g., who throws the most strikes that are over 50 mph).

Competitive games can be a tremendous tool in your practices. But some coaches think that they are a great coach because they use a lot of competitive games in their practices and they see the kids having a lot of fun—without gauging whether those games are actually useful. It's a myth that 'kids having fun' is the number one goal of a coach. The number one goal of a coach is 'kids having fun while learning' because if the kids are only having fun but aren't learning and progressing in their skills, the coach is merely a glorified babysitter. Have a critical eye with whatever competitive games you use in practices. Remember to ask yourself: are my competitive games teaching or firmly reinforcing skills that I'm teaching? If not, then it's time to scrap them—or modify them so that they do teach or strictly reinforce skills you are teaching. There's no shame in simply teaching skills without competitive games. As long as what you're teaching is challenging their skillset, the kids will be engrossed in the activity—even without competitive games.

Hopefully this article gave you some clarity on the utility of competitive drills, how to be more discerning and how to make bad drills better. To help give you more of an Edge, I've got an exclusive resource for you. I list 10 more examples of bad competitive games, why they're useless and how to improve them (if possible). If you're like me and need a lot of examples before you grasp a concept, this PDF may help you understand this important concept better. And did I mention it's free? Wait for the modal to appear to sign up for it. Note: downloading the PDF will also sign you up for my newsletter (unless you are already subscribed). My email newsletter contains exclusive content not found anywhere else on the blog or podcast, plus you'll get all the latest blog updates. You can unsubscribe later at any time.